Bitcoin and crypto prices are back in the green this Monday morning in Asia following a 5% gain from the king of crypto. BTC markets have been bolstered again and a couple of factors could be in play.

Following a fall from resistance last week, bitcoin price has rebounded again over the weekend as it pushes back above $8,600 this morning during Asian trading. The last 24 hours or so have been bullish with steady gains increasing BTC prices by almost 5% since the beginning of the weekend. 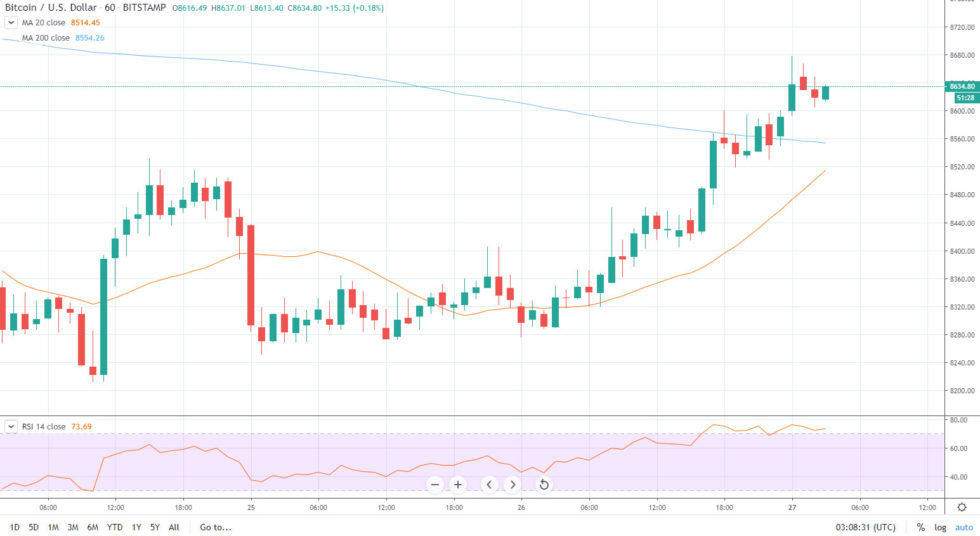 Analysts such as Josh Rager have commented on the premise that anything holding over $8k is bullish the longer it stays there.

The longer we range above $8k, the more bullish, imo

There could be a number of factors in play that have resulted in a return to resistance for BTC.

With the spread of the Chinese Coronavirus, travel restrictions are coming into effect and the death toll is rising. Concerns are mounting over the Chinese authorities’ efforts to contain the virus as cases begin to emerge worldwide.

As a result, the yuan has fallen this morning according to Reuters. The offshore yuan fell almost 0.5% to just below 7 per dollar, its weakest since January 8.

The state announced it will extend the Lunar New Year holidays to February 2 to further prevent contamination spreading.

Falling fiat strength is usually a bullish signal for bitcoin and the Chinese have a huge sway on bitcoin markets and sentiment.

Gold prices have made a similar recovery and are making another push towards $1,600/oz again.

According to reports, analysts are keeping a close eye on the Federal Reserve interest rate decision on Wednesday. Conversely the S&P 500 experienced its worst week since the middle of August.

It is not the first time that bitcoin prices have moved in tandem with gold in the short term which strengthens the safe haven narrative for the asset.

Did BTC Jump Due to The Italian Effect?

Italy is not known as a big player in the world of crypto but the county is yet again in the grips of a political crisis. Late on Sunday Italians were awaiting the election results from the relatively rich region of Emilia-Romagna near Milan which could have handed power to Matteo Salvini’s nationalist Northern League.

Trustnodes made the connection that similarly timed bitcoin rally may have been initiated as a result of a potential power shift that could see anti-Euro leaders in charge.

The initial results are not looking favorable for Italy’s far-right firebrand Salvini however, but the full count will not be available until later today.

Whether this was directly related to the bitcoin rally remains to be seen but wider concerns over in the Far East are likely to have been a greater influence.

What caused the bitcoin weekend price rally? Add your comments below.