The cryptocurrency market is up by 1% in the past 24 hours. At $1.113 trillion, its total cap has risen by 9.3% in the past week, and by 23% in the last 30 days. It is, however, still far below record highs set back in November of last year, meaning that it has plenty of room left to recover. This is particularly true in the case of newer altcoins. Many of the latter launched within the ongoing bear market, and have therefore never benefitted from bullishness. As such, many could be in for bigger gains than much of the market in the coming weeks. Accordingly, this article presents the 5 best new cryptocurrency to buy now, covering coins launched within the past 12 months or so.

Running on Binance Smart Chain, Battle Infinity (IBAT) is a play-to-earn crypto gaming platform that has launched its presale a few weeks ago. Making IBAT available at $0.0015, it has 68 days left to run, yet it has already raised over 8,000 BNB (c. $2.3 million). BSC Scan also reveals it now has around 3,500 holders, a number which has more than doubled in a week.

🙌🏼We have raised 50% of our hardcap within just a few weeks! Thank you for all the support and trust in our project. You’re making our dream come true!

With its most of its team based in India, Battle Infinity is developing a sports-themed gaming metaverse. This will consist in various games, such as the IBAT Premier League. The latter lets players build their own fantasy sports teams, made up of NFTs representing real-life sportspeople. They win points — and IBAT tokens — based on the performance of their teams.

BUILD YOUR OWN STRATEGIC TEAM AND BATTLE IN THE NEWEST NFT-BASED FANTASY SPORTS GAME – BATTLE INFINITY!

On top of the IBAT Premier League, Battle Infinity will also be adding crypto and NFT-based games, as well as a competitive staking feature, its own DEX and an NFT marketplace. These plans have helped it attract lots of interest, with the project already trending in Twitter in various regions. This is why it could be big, and why it’s one of our 5 best new cryptocurrency to buy right now.

We’re again trending in India! What a beautiful sight🔥 pic.twitter.com/IYs4I6LJj7

APE’s indicators have shot up since the beginning of the month. From 30 barely a couple of days ago to nearly 70 as of writing, its relative strength index (in purple) highlights considerable momentum.

APE is the governance token of the ApeCoin DAO, which oversees the Bored Ape Yacht Club NFT-based ecosystem. It’s rising for a couple of reasons, with the first being that it’s making up for previous losses. Secondly, ApeCoin has announced that none other than Gucci will be accepting the altcoin as payment for goods in select US-based stores.

Excited to announce that @Gucci will become the first major brand to allow customers to pay for purchases in-store with ApeCoin, via @BitPay. 🎉🎉🎉 https://t.co/ipoeW6lXLl

It almost goes without saying that this is a massive endorsement for ApeCoin. Gucci’s embrace of APE testifies that it will have wider utility than just being a governance token.

ApeCoin has also been rallying in recent weeks due to the demoing of its upcoming metaverse, dubbed the Otherside. Again, the imminent launch of the Otherside highlights how the Bored Ape Yacht Club is very likely to evolve well beyond being a trendy NFT collection. And with APE still 72% down from its all-time high of $26.70, set in April, it could rally big soon. This is why it’s one of our 5 best new cryptocurrency to buy.

The Otherside is shaping up to be one of the most exciting things to happen in Web3.

Recently, the team dropped a detailed light paper that gives us a glimpse into the future of this metaverse.

Here’s a breakdown in 10 tweets 🧵: pic.twitter.com/ylHVYfhoTn 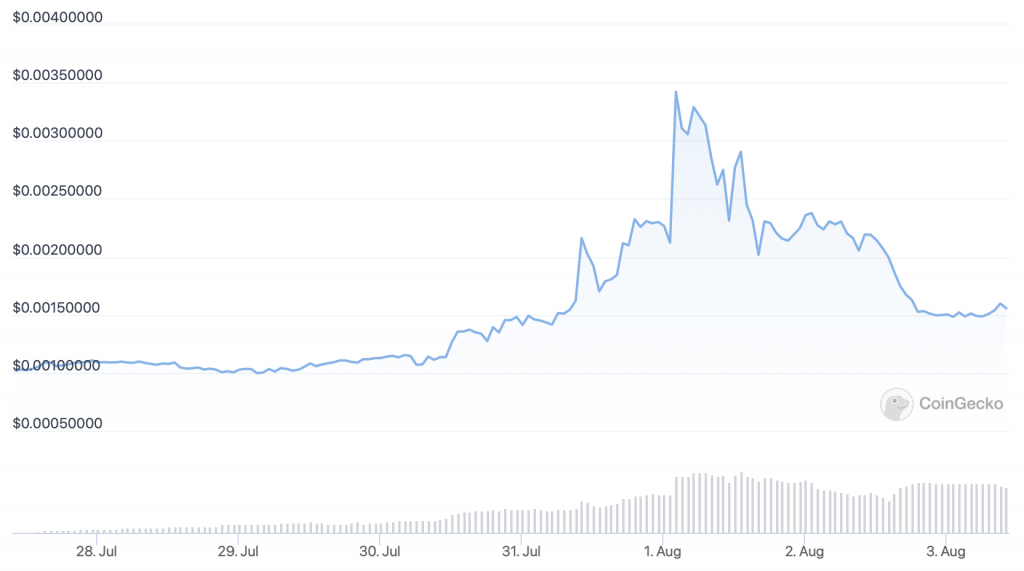 Thanks to its recent rally, LBLOCK has now appreciated by just over 260% since launching in January. It’s also down by 83% since its ATH of $0.00974554 from January, meaning it has plenty of ground left to recover.

There was one main reason for its recent surge: the launch of the Ethereum-based, second version of its coin.

Become a holder of V2 token, that has gained 250% in the first couple of days and is expected to continue rocketing!🚀

Already live on LBANK Exchange and MEXC Global, the V2 version of LBLOCK has already opened the coin up to more demand. This will increase in the coming months, as more exchanges add to their platforms.

There are also other fundamental reasons why LBLOCK should continue rallying. Firstly, Lucky Block expanded its ecosystem to include various NFT-related competitions. By purchasing a Lucky Block NFT, users will be able to enter different draws. This includes draws for Bored Ape Yacht Club NFTs, $1 million in bitcoin, a luxury holiday, a FIFA World Cup package, and also a house worth $1 million.

With our amazing new #NFT competitions & rewards platform you’ll have a chance to win amazing prizes!

Check out our new website now at https://t.co/BsfMBMnCmB and be ready 🦾#NFTs pic.twitter.com/DqUOcBKTvw

It’s also worth mentioning that Lucky Block’s NFT platform will also enable NFT holders to earn rewards in LBLOCK. In addition, all holders of LBLOCK will be able to claim their share of 10% of each daily prize fund, simply by heading over to the Lucky Block web app and voting for a charity (which will receive an additional 10% of each fund). 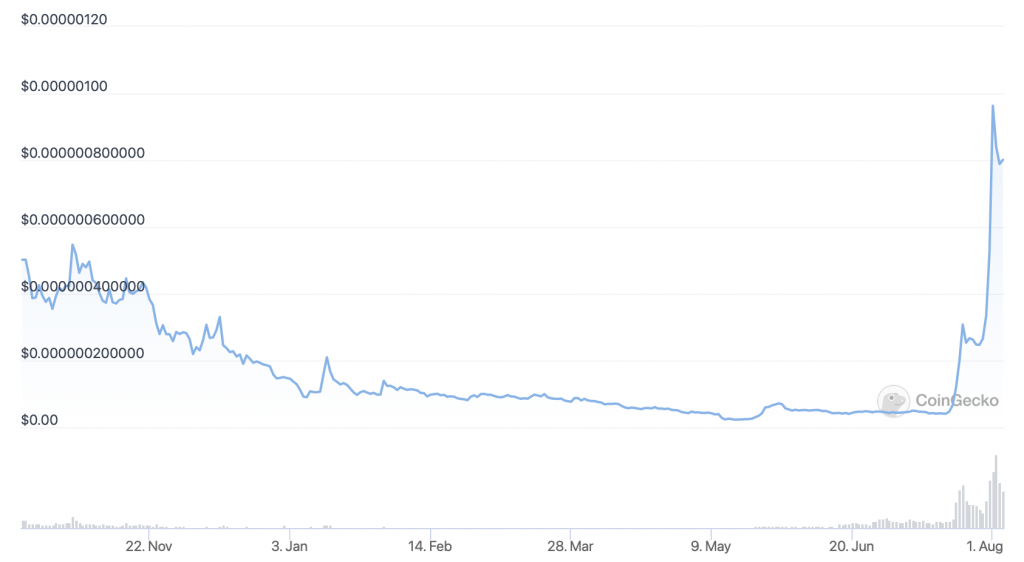 LOVELY witnessed its all-time high — of $00000111 — just two days ago. It’s rallying largely because it’s celebrating a series of new exchange listings, including on Huobi, Bibox, Babyswap and ZT.

While LOVELY presents itself in the mould of a meme coin, it operates within a DeFi ecosystem. This includes the Lovely Swap DEX, which runs on Binance Smart Chain.

LOVELY has a max total supply of 60 trillion, with several burning events already having taken place to push its supply down. This contrasts with many other meme tokens, which have unlimited supplies. Combined with its growing community of 244,000 Twitter followers, these tokenomics suggest it has a bright future. It therefore makes the cut as one of our 5 best new cryptocurrency to buy. 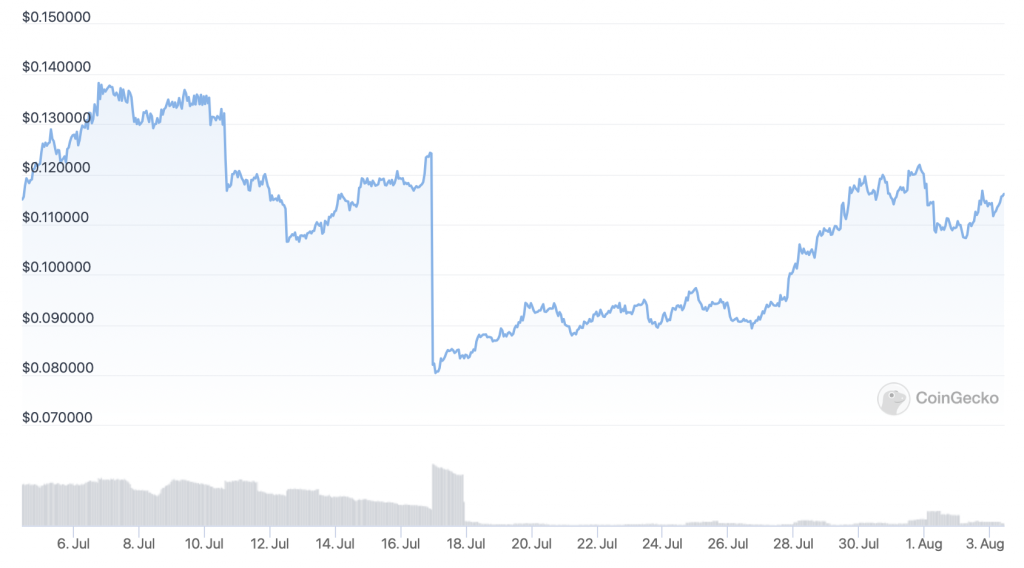 DEFC is up by 564% since reaching an all-time low in February of this year. Its main selling point is that it’s the native token of the new DeFi Swap DEX, which aside from trading also offers staking and yield farming services. Based on Binance Smart Chain, DeFi Swap went live in May, which was the main factor in DEFC recovering from its record low in February.

Beyond being the native token of DeFi Swap, DEFC has other functions. Most notably, it provides holders with rewards, which are sourced from a 10% tax charged whenever someone buys or sells the token. Such a tax imposes constraints on selling, something which supports DEFC’s price.

DeFi Swap is currently ranked the 58th biggest DEX in the crypto ecosystem, according to CoinGecko. For an exchange that launched as recently as May, this is very promising.

Your capital is at risk.

Is this the Best New Meme Coin to 10x? Tamadoge Set to Overtake Dogecoin

Will Shiba INU Reach $1? No, New Cryptocurrency Memecoin Might?

Vinteum launches in Brazil to aid the Bitcoin ecosystem

Develop Your Own Cross-Chain NFT Marketplace

Is it foolish to expect a massive Ethereum price surge pre- and post-Merge?