As crypto markets grow and mature, macroeconomic factors start to have a larger influence over them as is the case with traditional finance.

In the early days, Bitcoin and crypto market cycles were largely influenced by halving events. These happen approximately every four years, or every 210,000 blocks, when the block reward for miners is halved.

However, there could be greater influences over Bitcoin and crypto markets in the form of the M2 money supply. This metric appears to be highly correlated with market movements over the past decade.

Ok, two more charts and some thoughts…this time on crypto….
Is the accepted narrative of the BTC Halving cycle what drives the BTC cycle (and all crypto) or is it the macro?
Im starting to think it’s all about the macro
This is global M2 YoY vs Crypto market cap #Bitcoin https://t.co/sSB7CaVFdE 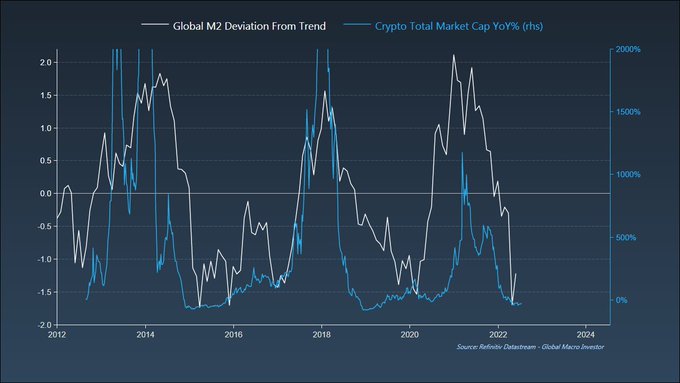 The M2 money supply, also referred to as “M2 Money Stock,” is a measure of the amount of currency in circulation. It includes M1 money, which is physical cash and deposits, in addition to currency that is “less liquid,” such as bank savings accounts.

M2 money supply growth rates have slumped this year as inflation has surged. Pal commented that declining demand for crypto had caused the outflows, adding:

“That suggests that liquidity and currency debasement are the predominant drivers, as opposed to supply.”

It also stands to reason that more caution will be exercised with less money available to investors, especially with high-risk investments such as crypto. The cost of living crisis has exacerbated this in 2022, with most countries facing multi-decade inflation highs and surging consumer goods, fuel, and energy prices.

Pal commented that global M2 growth is turning. “Early days, but crypto is forward-looking in nature and turns earlier than most assets as its such long duration,” he added.

Crypto markets have indeed turned over the past week or so, but it is still early days, and bear markets are usually long drawn-out affairs. Over the past seven days, the crypto market cap has grown by 15%, reaching $1.1 trillion.

However, markets are still down almost 70% from their peak levels in November last year, and the current rally could be dead cat flavored.

Two significant events next week in the U.S. could send crypto south rapidly. The Federal Reserve is expected to hike rates again, which is generally bad news for risk-on assets.

Additionally, the U.S. Bureau of Economic Analysis (BEA) is set to release its advance estimate of second-quarter GDP (gross domestic product) growth on July 28. Two negative quarters in a row would spell a recession, which would also have a negative impact on crypto markets.

Latest Report Shows Cryptojacking Increased By 30% During The Crypto Slump

TA- My Neighbor Alice Could Be Set For A Major Bounce